NetRun will 'RUN' a 'List' of programs only when a internet connection is detected, and close/kill the same 'List' when the connection is lost. When I upgraded my machine to XP, the program that I was using stop working so I was forced to write this program.
Freedom...

Here is a screen shot of NetRun's setup dialog and its tray icon! 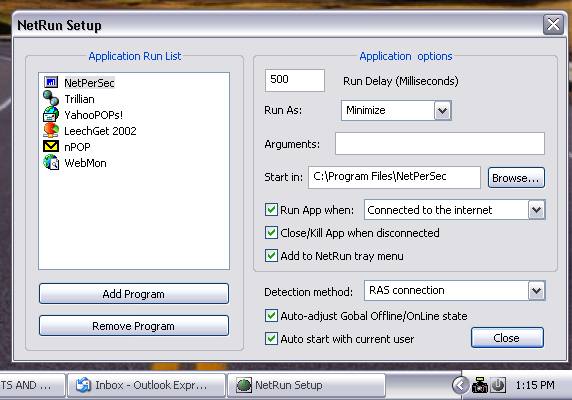 You have two choices here! You can download the release version and the beta version.

The release version is always the most stable and tested version, but it may lack the latest features.

The beta version is the version I'm using! It has all the features and bug fixes, but may have new undiscovered bugs! If you use this version please report any problems you find, I can't fix what I don't know about! Most people assume that someone else will report it, that is NOT the case!!!!

NOTE: The latest versions uses a new installer, so uninstall any old versions before installing!!!

Both versions have a Installer/Uninstaller so just execute to install.

A clever person may notice that some time both version are the same, or the beta is lower! This may be the case when a beta has passed a testing period with NO reported bugs (yet!) and has become the Release version! HINT: Download the Release version when this is the case.